Secret of success in Digital-Marketing 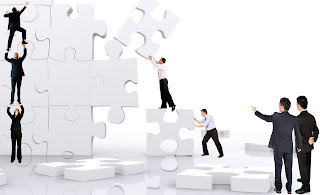 Consider some of today’s most exciting  games Cricket, Football, Hockey. All of them are played by teams. Even sports that are played by individuals such as tennis, archery and weight- lifting contribute their success or (failure ) to  a larger contingent or team.

Complicated surgeries frequently involve a team of doctors. Elsewhere, from  debating societies to construction sites, co- operation, collaboration and the responsibility of each individual to the collective group is of vital importance.

The cliché ‘A chain is as strong as its weakest link’, is very relevant to the concept of  team spirit so, whether one is the star bowler, batsman goalkeeper or back-up player; the surgeon who performs a complicated transplant or the nurse handing him instruments in a precise and timely manner, the role of each is interdependent and significant.

In the second decade of the 21st century, opportunities abound as never before so, while competition could challenge individuals to improve their own personal performances, collaboration, shared goals and the satisfaction of all participants contributing according to their own capacity this is what team work is all about.

To illustrate the benefits of team work over individualism, a story is told about Heaven and Hell:
A visitor, intending to make a choice for his future wanted to examine the                     merits of both, Heaven and Hell.
He was shown two identically appointed banqueting halls. The aroma of good food from both places enticed his nostrils. The music was just right, so was the décor. Even the cutlery was identical.
Why then, he wondered, was one room full of angry, discontented people while from the other emanated murmurs of satisfaction.
The answer lay in the way the extremely long-handled cutlery was being used.
In Hell people were unhappy because they were trying unsuccessfully to get the food into their own mouths. The long handled spoons were jabbing their neighbours in the face while soup spilt onto the table linen and nothing reached their mouths.
Heaven had the identical cutlery, so what made the difference?
In Heaven, people were able to enjoy the meal because they decided to reach out across the tables and FEED EACH OTHER!!!

The differences between Heaven and Hell are similar to the advantages of team work over individualism. In team work, emphasis is on the goal. Individual needs are set aside, the common good is supreme and each facilitates the other in achieving it. Everyone is a winner.
Colleges are recognizing the value of inculcating the team spirit in their students. Most colleges hold Events (Malhar at St. Xaviers, Mood Indigo at IIT B to name two). These events involve several specialized tasks and teams of students undertake them with creativity and expertise.

Social service is another area in which teams of college students contribute to society. Literacy programs, environmentally sensitive activities and work related to health and hygiene are some of the ways in which colleges engage teams of  students.

Classroom assignments too are increasingly becoming tasks for teams. The opportunity to share knowledge, set it forth in a manner that is unique to the group; to learn from each other --- these gains from working in a team go well beyond the academic frontiers. They are lessons for life.
The process of undertaking assignments in a team involves
¨      Study of the topic through group discussion.
¨      Selecting the salient features for presentation.
¨      Delegating tasks.
¨      Executing the given tasks.
¨      Assembling all the component material.
¨      Reviewing the product.
¨      Following a strict time schedule.

It must be borne in mind that teams are made up of people. People with their own personalities, moods and skills. To recognize this to work with it to work around it, all of this is so much easier to do in the context of a team which provides a safety net to ensure that any individual’s fall is not fatal and can be compensated for by the group.

Once the team realizes the value of working as a focused harmonious unit, they may discover that they are simply teeming with ideas for more work!
By Yogi Udgire at December 24, 2012
Email ThisBlogThis!Share to TwitterShare to FacebookShare to Pinterest
Labels: digital marketing, internet marketing success secret, online marketing, Social Media, success, success secret, team work, web marketing