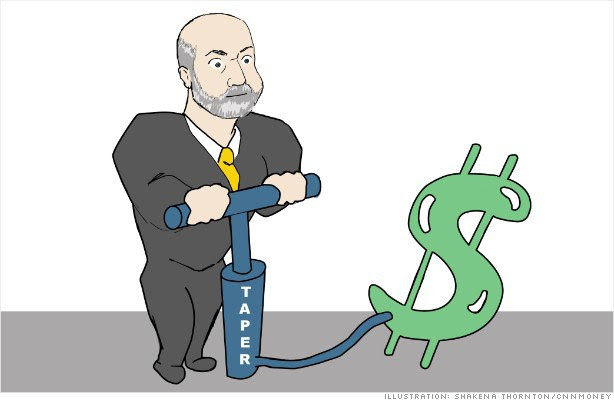 Its surprising that not many know about the tapering and the current issues involved with it. With this article i aim to share my knowledge with the readers as it is  the issue which should be known.
WHY SHOULD WE KNOW ABOUT TAPER?
The 2008 crisis is not unknown to anyone. US economy was the worst hit with all time low employment and growth rates of the economy. There was deflationary pressure too. So to overcome all this Fed introduced its bond buying program. But now as the economy is recovering fed has decided to taper its bond buying program i.e to cut down or shorten the easing.  At first it may seem just as a normal event occurring in US which is related to FED. But a closer inspection will reveal it’s more than what meets the eye. India gets affected directly as well as indirectly.  Not only India but emerging economies such as China, Brazil, and South Africa and European nations get affected by it too.
LETS GET STARTED...
The Fed, or any central bank for that matter, enacts quantitative easing by creating money and then buying bonds or other financial assets from banks. The banks then will have more cash available to loan. Higher loan growth, in turn, should make it easier to finance projects – for example, the construction of a new office building.
“Tapering” is a term that exploded into the financial lexicon on May 22, when U.S. Federal Reserve Chairman Ben Bernanke stated in testimony before Congress that that Fed may taper - or reduce - the size of the bond-buying program known as quantitative easing (QE).

On December 18, 2013, the Fed announced the first tapering: beginning in January, it will reduce its purchases to $75 billion per month - $35 billion of mortgage-backed securities and $40 billion of Treasuries. The Fed is on track to reduce the program steadily throughout 2014 as long as economic growth remains on track and unemployment continues to fall.

The emerging markets suffered from the downfall initially while the stock markets crashing and rupee weakening against dollar at a historic rate of 68.85 in August 2013.
But now India is well prepared to fight the consequences and also its at a better position. Indian economy is doing relatively well than in June when the early signs of tapering were shown. Indian markets have already factored the tapering so an adverse effect will not be seen unless there are some other developments too.