Is Your iPhone Turning You Into a Wimp?

What kind of a device are you using to read this article? And what does your body posture look like? Are you hunching over a smartphone screen, arms tightly at your side? Are you slouching over an iPad or laptop? Or are you stretched out comfortably in an office chair, scanning a large desktop monitor?
The answer may determine whether you'll play the wimp or the hero in your next office meeting.
The body posture inherent in operating everyday gadgets affects not only your back, but your demeanor, reports a new experimental study entitled iPosture: The Size of Electronic Consumer Devices Affects Our Behavior. It turns out that working on a relatively large machine (like a desktop computer) causes users to act more assertively than working on a small one (like an iPad).


“We wanted to study how interacting with a device affected how people behave afterward.”

"People are always interacting with their smartphones before a meeting begins, thinking of it as an efficient way to manage their time," says Maarten Bos, a post-doctoral research fellow at Harvard Business School, who co-wrote the study with HBS Associate Professor Amy Cuddy. "We wanted to study how interacting with a device affected how people behave afterward."
The study is related to previous experimental research in which Cuddy and colleagues prove the positive effects of adopting expansive body postures - hands on hips, feet on desk, and the like. Deliberately positioning the body in one of these "power poses" for just a few minutes actually affects body chemistry, increasing testosterone levels and decreasing cortisol levels. This leads to higher confidence, more willingness to take risks, and a greater sense of well-being, according to the 2010 report by Andy Yap, Cuddy and Dana Carney, "Power Posing: Brief Nonverbal Displays Affect Neuroendocrine Levels and Risk Tolerance."
Contractive body postures such as folded arms have shown the opposite effect, decreasing testosterone and increasing cortisol. Bos and Cuddy wondered whether there might be behavioral ramifications from using electronic devices. Looming over his colleagues at six feet, seven inches tall, Bos must contract his body more than most of us when operating a laptop, tablet, or smartphone. But many of us constrict our neck and hunch our shoulders when we use our phones. And statistics show that we use our phones a lot. 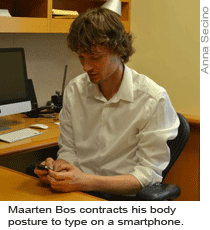 Americans spend an average of 58 minutes per day on their smartphones, according to a recent report from Experian Marketing Services. Talking accounts for only 26 percent of that time. The other 73 percent is devoted to texting, e-mail, social networking, and web-surfing - in other words, activities spent hunched over a little screen. (Usage varies according to the type of smartphone: iPhone users spend an average of one hour and 15 minutes with their phones each day, with only 22 percent of that time devoted to talking.)

Bos and Cuddy hypothesized that, compared with smaller devices, interacting with larger devices would lead to more expansive body postures, which in turn would lead to behaviors associated with power—including assertiveness and risk-taking behavior. Previous experimental research had shown that people were more likely to gamble after holding their bodies in expansive poses and less likely in constrictive poses. Now they wanted to look into whether behavior was affected during the poses. This might help to answer questions like: Would people be more likely to join a game of online poker while using a desktop computer than while using an iPhone? Would they be more likely to bid higher on an eBay auction when competing to buy a product?
To test their hypothesis, Bos and Cuddy conducted an experiment at the Harvard Decision Science Laboratory, a university-wide research facility for behavioral research. They paid 75 participants $10 each and randomly assigned them to perform a series of tasks on one of four devices, each successively larger than the next: an iPod Touch (which looks like an iPhone), an iPad, a MacBook Pro laptop, or an iMac desktop computer. Each participant sat alone in a room during the experiment, monitored by a research assistant.
The experiment went like this: After five minutes of using the assigned device to take an online survey, each participant was given two dollars, along with the choice of keeping it or gambling it in a double-or-nothing gambling game with 50/50 odds. Next, the participant continued with a few other tasks and a final questionnaire, all on the assigned device. 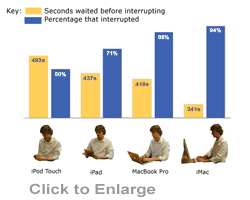 When the participants were done with the tasks, the researcher pointed to a clock in the room and said, "I will get some forms ready for you to sign so I can pay you and you can leave. If I am not here in five minutes, please come get me at the front desk."
Rather than returning in five minutes, though, the researcher waited a maximum of ten minutes, recording whether and/or when the participant had come out to the front desk.

The experiments showed no apparent effect on the participants' gambling behavior. The majority chose to gamble the two dollars and to risk taking another card in Blackjack, regardless of which piece of Apple equipment they were using.
However, device size substantially affected whether the participant left the room after waiting the requisite five minutes. Of the participants using a desktop computer, 94 percent took the initiative to fetch the experimenter. For those using the iPod Touch, only 50 percent left the room.
And among those who did leave the room, the device size seemed to affect the amount of time they waited to do so. The bigger the device was, the shorter the wait time. On average, desktop users waited 341 seconds before fetching the experimenter, for instance, while iPod Touch users waited an average of 493 seconds.
"The steady increase of waiting time is locked in step with the size of the device," Bos says. "I have never before in my life seen such a beautiful effect."
The results indicate that expansive body postures lead to power-related behaviors, even in cases where the posture is incidentally induced by the size of the gadget or computer. As for the difference between the gambling and waiting results, this may indicate that it takes a little while for body posture to affect behavior. After all, it was the final task of the experiment that garnered the dramatic results. "So, what we're thinking now is that you need at least a few minutes of interacting with a device, or, more importantly, of being in a specific posture related to that device, before you find effects," Bos says.
However, he says, it will take additional experiments to determine whether expansive postures are only effective after the fact. "It may be that power-posing doesn't actually work during the power-posing, but it works right after," he says, "Future research will tell."

In a related line of work, the researchers are studying whether our behavior is affected by how we sleep - curled up in the fetal position, for example, versus limbs sprawled across the bed. Bos and Cuddy also are planning to conduct a field experiment, measuring the effect of device-induced body posture in an actual office setting.
In the meantime, the initial lab results suggest it may be a good idea to avoid the smartphone immediately before your next big sales meeting. Texting up until the boss starts speaking may make you look busy, but it may make you act meek.
"We won't tell anyone not to interact with those devices just before doing something that requires any kind of assertiveness," Bos says. "Mostly because people won't listen: They will do it anyway. But if you realize that, 'hmm, I'm pretty quiet during this meeting,' then maybe you should pay attention to how devices impacted your body posture beforehand
By Anonymous at March 27, 2014
Email ThisBlogThis!Share to TwitterShare to FacebookShare to Pinterest