Clayton S. Rose's recent case study looks at the behavior of teammates who were swept up in Lance Armstrong's cheating scandal. When do followers need to break away from their leader?

by Michael Blanding
Cyclist Lance Armstrong overcame incredible personal adversity to reach the highest levels of success. Then, just as spectacularly, he fell from grace in a public scandal that destroyed not only his reputation, but also the reputations of many others who had devoted themselves to him—in the end, tarnishing the entire sport of professional cycling.
When Armstrong confessed to Oprah Winfrey in January 2013 that he had "doped"—taken performance-enhancing drugs—to win his record seven consecutive Tour de France victories from 1999 to 2005, few could be surprised. Rumors and allegations had been swirling around the cyclist for years.
And yet, there was still something shocking about the admission. At the peak of his career, Armstrong was one of the most celebrated athletes in the world, earning $28 million a year from team salaries and sponsorship deals. 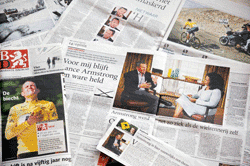 The Lance Armstrong doping scandal hurt not only Armstrong's own reputation, but the reputations of his teammates. Photo: iStockPhoto
More than that, Armstrong had transcended himself to become an icon, having overcome testicular cancer and then raising nearly $400 million to fight the disease through his Lance Armstrong Foundation (now the Livestrong Foundation). Since 2004, the yellow Livestrong bracelets on the wrists of his supporters had become a ubiquitous symbol of hope and determination.
When Armstrong chose to break the rules of professional cycling by taking illegal substances, he did more than put his own career in jeopardy—he betrayed millions of people who believed in him, and risked the reputations and careers of teammates in order to win personal glory.
"Once he decides to cheat, it is not just about him, he needs to create this whole infrastructure around him with this incredible organization to facilitate it," says Professor of Management Practice Clayton S. Rose, who sees in Armstrong's story an ideal vessel for teaching lessons about business ethics and leadership.
Along with research associate Noah Fisher, Rose wrote the case study Following Lance Armstrong: Excellence Corrupted, which was taught to all incoming MBAs on their second day on campus in the fall. The goal was to get them to think about their own values and the obligations they have to shape the culture of an organization.
As much as Armstrong's story says about his own decision to betray his responsibilities, Rose sees more of a lesson in the decisions made by his followers—fellow riders, medical staff, and training staff—to go along with Armstrong's deceptions. "How do you start to go down that slippery slope?" Rose asks. "What can you do to stop yourself—and at what cost?"
Despite its emphasis on individual heroes, cycling is very much a team sport, one where the team supports the leader and works for his success. Riders help shield their leader from other cyclists in tight packs, draft in front of him to reduce wind resistance during climbs, and chase down rivals who break from the group.
So when Armstrong decided to dope, he required other riders to dope as well to match his escalating performance level, and the rest of the support team to facilitate the doping and manage the cover-up to achieve victory.
Nor was he alone. By the 1990s, doping in the sport had become widespread and common. Of the top three finishers in the seven years Armstrong won the Tour de France, 20 out of 21 of them had doped at some point in their careers. (As the case notes, cycling legend Greg LeMond is a notable exception; he achieved three Tour victories and never tested positive for illegal substances.)
In his interview with Winfrey, Armstrong's main defense was a variation of "everyone else is doing it."


“How do you start to go down that slippery slope?”

Because doping was so widespread in the sport, he said, the action was a necessary evil. "The definition of 'cheat' is to gain an advantage on a rival or foe that they don't have," Armstrong told the television host, hardly seeming penitent. "I didn't view it that way. I viewed it as a level playing field."
Such rationalizations don't take into account the advantages that some cyclists have over others. With Armstrong's great wealth, he was able to put together a much more sophisticated doping operation than less successful cyclists.
By contrast, Armstrong's teammate Tyler Hamilton made no such excuses when he testified two years earlier to a federal grand jury, and then in an emotional interview on 60 Minutes in which he publicly revealed the extent of doping on Armstrong's team.
One of the best cyclists in the world, Hamilton became a star for his ability to climb the most difficult mountains. According to Hamilton's later admissions, he began taking testosterone pills in 1999, and later shared a trailer with Armstrong in order to facilitate advanced doping techniques to boost their red blood cell counts for increased oxygen capacity during the Tour de France.
In his 60 Minutes interview, Hamilton rightly predicted a backlash from Armstrong and other teammates, who publicly disparaged him. But he defended his decision, saying, "I love the sport and want to do what's best for the sport. I guarantee in the long term, people will come back and thank me."
The students in Rose's class spent time arguing about Hamilton's decisions—to dope, to aid Armstrong, and then to turn against him. "They had different interpretations of what loyalty meant—it caused a reflection on the part of students about what they owe a leader and what they are owed by the leader," says Rose.
Hamilton's story illustrates the fact that no ethical decision is without cost. Had he not chosen to dope, Hamilton may not have achieved the victories he did. But the cost of following Armstrong was personal disgrace. "This is not a free ride," says Rose. "You have to be prepared to live with the consequences of the decisions you make."
Rose emphasizes that the case is not centered on dictating to students a particular value system; rather, it begins to reveal to them the importance of understanding their personal values so they will be able to make decisions on their own terms—and not blindly follow a bad leader or corrupt system that can lead to choices with legal, moral, and reputational costs.
The lessons from Armstrong's story go beyond the classroom to apply to a range of business situations—on both Wall Street and Main Street—where well-meaning people might be asked by a leader to break the rules for personal or corporate gain.
"We want our students to think deeply about how 'good people' might find themselves in a situation where they are doing something wrong—and might even be helping develop or perpetuate a corrupt culture themselves," Rose says. "The case is part of process at HBS [that] we hope will better arm [students] to consider these issues when they face them, be better leaders, and avoid making decisions that they will regret."
That's the bigger lesson of Armstrong's story. "There was one Armstrong, but there were lots of Hamiltons," Rose says. At some point, we are all Hamilton. While few of us will reach the heights of achievement that Armstrong did in his career, all of us will have the experience of following a leader. And we will all have to weigh our actions in light of what we—not they—feel is right."

By Anonymous at March 27, 2014
Email ThisBlogThis!Share to TwitterShare to FacebookShare to Pinterest