Valdemar W. Setzer, a Brazilian anthropologist, once very correctly asserted, “Ethics is not definable, is not implementable, because it is not conscious; it involves not only our thinking, but also our feeling.” This saying is of utmost relevance keeping in purview the current days’ sorry state of affairs. At every point and juncture, morality has gone to dogs. The world of marketing is no longer an absolutely clean environment. It has become complex, complicated and corrupted. Marketing, like any other domain, has fallen prey to the cancer of corruption. 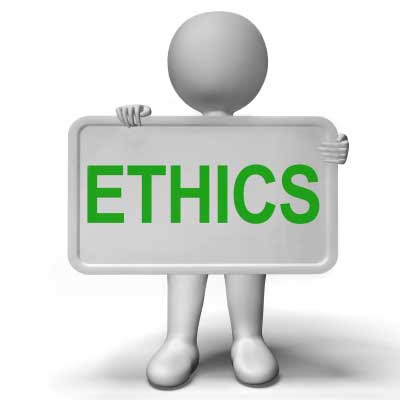 image:freedigitalphotos.net
Firstly, I would address to the nature of problems faced by the marketing researchers. The fact remains that ethical problems occur only when an individual interacts with other people. The ethical philosopher Baier points out that "a world of Robinson Crusoe’s has no need for morality." Thus, needless to say, in a field like marketing when people come in contact with each other at a rampant rate, facing ethical issues is not at all surprising. In fact, during ethical issues’ identification, it was noted that the major ethical issues could be enumerated as follows:
(a)   Gifts, gratuities, etc (b) Dishonest advertising (c) Price discrimination and unfair pricing (d) Cheating customers, unfair credit prices and overselling (e) Price collusion by competitors (f) Dishonesty in making and keeping a contract (g) Unfair competitive practices (h) Unfairness to employees and prejudice in hiring
Now, I would like to put forth certain fundamental statistics. Given below, is the factor analysis of the ethical problem scale.


As per this statistics, the Eigen value comes out to be 3.2 whereas the coefficient alpha is 0.82. Conclusively, these items on a single scale measuring the la- tent construct "ethical problems of marketing researchers” can be utilized for exploratory purposes.
While talking of marketing ethics and the latest developments we obviously need to throw light on the latest breach on ethics by Wal-Mart. The situation is such that a whistle blower working exactly on the ethical lines of the organization might find herself out of the job. On the first day when Chalace Epley Lowry joined Wal-Mart Stores as an administrative assistant in the communications department, she underwent a lengthy orientation severely emphasizing on ethics. It was also stressed that even seeing anything with the appearance of anything unethical should be instantly reported. Currently, two weeks post complaining against a more senior executive, the 50-year-old mother of two is canned. This has drastically tarnished the reputation of the otherwise prestigious organization.
Taking into consideration further current trends in marketing ethics, we can definitely never overlook the issues faced by Yahoo. Just prior to being compelled to resign, Yahoo CEO Scott Thompson sustained for barely four months before discovering of résumé padding. Chairman and founder Richard Schulze left on Monday when directors realized that he used faulty judgment for being unable to disclose Brian Dunn's private relationship with a subordinate which is a violation of company ethics that led to Dunn's dismissal.
The next issue on marketing ethics that grabbed a lot of eyeballs recently was Belkin begging forgiveness for breach of marketing ethics. There was an absolute uproar on the Web during the weekend when it was noted that an employee at Belkin offered to pay people to ensure that they wrote positive reviews for his company's products, even if they hadn't tried them. There are chances that the reviews were fake, nevertheless the outcry over his taking on online marketing practices was real is sufficiently robust. It was Arlen Parsa who first dug up the story regarding Michael Bayard. It seems that Bayard was offering to pay 65 cents per positive review.
After stating the nature of ethical issues faced by marketing researchers and portraying the current scenario of ethics in the domain of marketing, I have compiled a set of nine suggestions. Firstly, the toughest ethical problem facing marketing researchers is the maintenance of the righteousness of their efforts. In spite of the several other problems faced by marketing research, the aspect of up keeping fundamental uprightness is by far the most challenging.
Secondly, the in-house researchers must learn to balance interest of self against interest of other parties judiciously. It includes the stabilizing harmoniously the personal desires and all other aspects of society. Even though marketing researchers’ realize options to engage in unlawful behavior, they personally realize a relatively low rate of unethical behavior. Often marketing researchers do not believe that inappropriate behaviors, generally leads to successful marketing research. A massive segment of researchers believes that successful managers are into unethical behavior. The point to be noted here is that gestures of top management in reprimanding unlawful attitude can greatly reduce the ethical issues of researchers.
Thus, this would be enumeration of all the basic aspects and the most recent and eye-catching affairs on marketing ethics. Even after all the enlisting of ideas, recommendations and statistical strategy, making oneself responsible is the key to all self-control. Finally, I would like to conclude with the words of George Bernard Shaw, “He who sacrifices his conscience to ambition burns a picture to obtain the ashes.” Hence we should always try our level best to work, live and lead ethically

Source:-http://www.mbaskool.com/business-articles/marketing/7699-marketing-ethics.html
By Anonymous at March 29, 2014
Email ThisBlogThis!Share to TwitterShare to FacebookShare to Pinterest