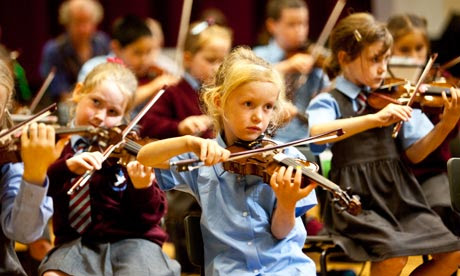 Millions of children in schools enjoy music each day by singing a song during circle time, learning to play an instrument, or singing a part in a chorus. This month, musicians and music educators celebrate Music in Our Schools Month sponsored by the National Association for Music Education.
Music In Our Schools Month celebrates all the benefits of having quality music education programs in schools and encourages districts to maintain such programs at a time when many face tough budgetary constraints.
Music education supporters advocate the importance of exposing young children to a variety of instruments, choral arrangements, and styles of music to enhance their educational experience and foster their academic, social, and emotional growth.
These supporters insist that music is more than an enjoyable hobby – and there is some science to back up these claims.
A 2007 study published in the Journal for Research in Music Education tied quality music education instruction to improved academic performance—specifically, better scores on standardized tests.
A 2005 article in The Midland Chemist found almost all of the past winners of the Siemens Westinghouse Competition in Math, Science, and Technology for high school students played one or more instruments, supporting a long-debated connection between success in music and science.
Often times, teachers and parents themselves report that studying music teaches discipline, perseverance, and work ethic.
Florida mother Kerissa Blue credits music with instilling a list of positive traits in her 12-year-old son, including patience, teamwork, discipline, and respect. She also observed an increase in his reading comprehension. Her son Krystopher added studying music has helped him with his reading fluency, creating mental images, and recognition of patterns.
Krystopher previously learned to play clarinet and took private lessons four days a week for four years. He currently participates in his middle school band playing percussion. When asked what level of dedication is needed to be successful in music, he replied "A lot!"
In New Jersey, River Edge's Teacher of the Year, music teacher Kelly Dent said she enjoys watching students express themselves in a cooperative setting. She called those moments "pure magic."
"The experience can be as simple as performing a hand clapping game with a partner, or as complex as a four part canon, but the result is the same- an improvement in emotional well-being and enhanced sensitivity to the needs of others,” Dent said. “In this way, music programs, especially those focused on making music, play an essential role in the development of social skills and emotional awareness in students."
In addition to the potential benefits of engaging in musical activities, exposing children to music at a young age may even open an avenue towards a career. Prior to entering the teaching profession, Dent herself played the French horn in a number of Broadway orchestras, including Wicked.
"As a child, I benefited immensely from musical experiences in my community,” Dent said. “I was able to travel the world, participate in summer music festivals, and eventually come to New York City to study. All of this was possible because of my early exposure to music lessons and ensembles."
Music therapy has proven to have some success among children with disabilities, as well. Children are drawn to the rhythm of the instruments and many find a way to communicate and open themselves up by singing or playing an instrument. Increasingly, schools and after-school programs for children with disabilities are incorporating music therapy and seeing great results.
Music In Our Schools Month aims to highlight the many benefits quality music education programs can have on children in America's schools. Supporters are already out there, raising money and awareness to maintain these programs – which they say is essential to a child’s mental awareness and development.  Do you agree?
Jennifer Cerbasi teaches at a public school for children on the autism spectrum in New Jersey. As a coordinator of Applied Behavioral Analysis programs in the home, she works with parents to create and implement behavioral plans for their children in an environment that fosters both academic and social growth. In addition to her work both in the classroom and at home, she is also a member of the National Association of Special Education Teachers and the Association for Supervision and Curriculum Development.
Jennifer is an educational consultant who works with families and educators to establish healthy and productive routines in the home and school. Adapting behavior management techniques she implemented for years as a special educator, she helps parents and teachers adopt these tools to fit their unique needs and priorities. Jennifer also speaks to parent and education groups on current topics in education and children's health.