Online Tourism Is India Lagging Behind?

Tourism is presently one of the fastest growing industries across the world. The tourism sector is directly responsible for about 5% of the world’s GDP and it employs one out of every 12 people in the developed as well as developing countries – (UNWTO, 2013) . Tourism generates roughly the same GDP as the global education and communications sectors, and about half that of the global banking and financial services industry. 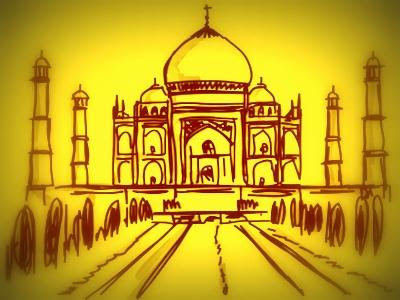 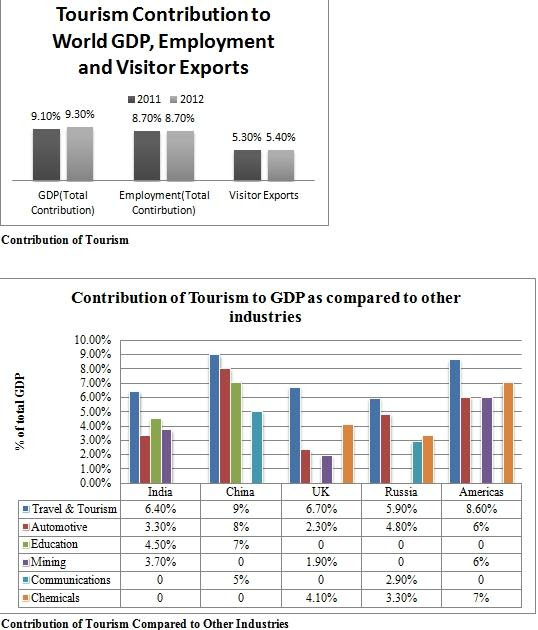 The tourism industry is a bread earner for majority of the developing nations which are now realizing the potential the industry holds for their economy. The International Tourist Arrival numbers have risen for both emerging and developed economies however the percentage change is higher for emerging economies. The historical dominance of developed economies gaining benefits over the developing nations seems to be changing. 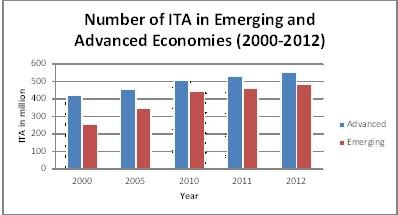 ITA in Advanced and Emerging Economies

The table below shows the world ranking and ITAs of the some popular nations in Europe and Asia pacific respectively. It can be observed that among the countries in Asia Pacific the contribution of India to ITA is very little whereas China ranks 3rd in the world. 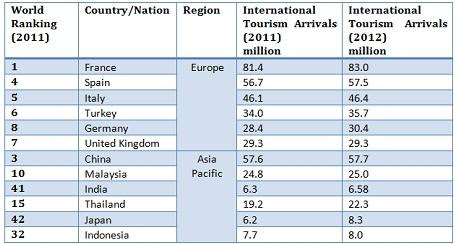 In past decade the Internet usage has amplified across the world which has seen the growth of approximately 566.4% from year 2000 to 2012 (InternetWorldStats, 2012). Internet has huge impact on the way the businesses are conducted all across the world.In 1996, United States held 66% of global internet user, but in 2012 this accounted for only 11.4% of the world. Asia-pacific accounted for 44.8% and Europe 21.5% (InternetWorldStats, 2012). The growth is at a tremendous rate in the developing countries like India, Brazil, Russia and aspiring countries (Argentina, Hungary, Malaysia, Mexico, Taiwan, and Vietnam).

PESTLE Analysis of Indian Tourism Industry
Political
• Ministry of Tourism
Central tourism body – Ministry of Tourism (MoT) to promote as well as maintain tourism sites
• Taxes
Heavy taxes (luxury, VAT, heritage and service charge) on the luxury and the star hotels
• Political instability in some states
Political insurgency in the regions such as Kashmir and North-Eastern States
• NASSCOM
Develop IT hubs to facilitate various online e-governance projects to promote IT

Economic
• Growing Economy
India is one of the fastest growing economies of the world
• Rise in income
With increase in household incomes, family trips and air travel have increased
• Foreign Investments and Business Ventures
The number of business travelers has increased significantly. Many foreign tourism enterprises have launched their websites in India

Socio –Cultural
• Indian Tourism based on culture and diversity
India is a very diverse nation both geographically and socially making her a one-stop destination for cultural tourism
• Cultural attraction and World Heritage sites
India being vibrant with rich history of cultures attracts many culture and heritage lovers and scholars for studies and exploration
• Communication
English is widely spoken and understood in major cities. Hence, communication barrier is less in the cities
• Medical Tourism
Low-valued currency and affordable and skilled medical treatments makes India popular for treatments related to heart and nerves.

Technological
• Information Technology
There are many tourism portals which enable the tourists to plan the trip, book hotels and tickets online.
• Internet Penetration
In spite of India being an IT hub the internet penetration is very low (<9%)
• Transport facilities
The transport infrastructure is still in the developing stage and lack state of art facilities
• Travel Companies
Constant price wars as more and more tour operators are moving their functions online.

SWOT Analysis
Strengths
• India’s rich cultural heritage, variety of cuisines, welcoming people, centuries of history, architectural monuments, hospitality and services
• India in comparison to many developed countries is an inexpensive country having much to offer in terms of traditional and modern western shopping experiences
• India has largest road and rail networks in the world but the quality of roads and services cause a dent in the travelers experience through the country.
• Huge marketing campaign (Incredible India) was initiated by the MoT

Weaknesses
• Low in the world tourism ranking(41st rank) (Indian Tourism, 2011),
• Under-developed customer services
• Very low internet speed, although the average internet speed is rising YoY
• Capacity of hotels across the nation is quite less and do not match up to the world standards
• Hardly 10% of older population uses internet
• Many heritage and archeological sites suffer from negligence and vandalism
• Stark poverty; beggars and vendors harassing and pestering tourists; high population density; over-crowded places; corruption and lack of hygiene and cleanliness
• Perception of India as being poor, dirty, polluted where people are superstitious and diseased
• Non-presence or limited presence of Travel Review websites providing reviews and feedback of the places in India
• Many web portals in India do not carry out the transactions in foreign currencies

Threats
• Increasing rape cases in the country and rise in violence against women have threatened the huge tourism industry.
• Terrorism is a major threat affecting the tourism industry in India.
• Apart from terrorism, natural calamities are also a constant threat to the industry.
• Aggressive strategies adopted by South-east Asian countries like Thailand, Singapore, Malaysia, and Indonesia to promote their tourism

India has become world’s third largest Internet user country after China and United States. A major gap can be seen in the age group > 54 of the Internet users in India (only 6%). According to IWS, the number of Internet users in India rose from a mere 5 million in years 2000 to nearly 137 million in 2012. India’s robust progress in Internet population, at six times the world average growth rate, has massive opportunity for E-Commerce sector. In spite of high number of internet users the penetration rate is very less compared to the global average.

Travel sector is leading the way in E-Commerce, with 1/3rd of all travel bookings are done online. Travel industry in India is growing faster than other non-travel industries like E-tailing, financial services, classifieds and other services: 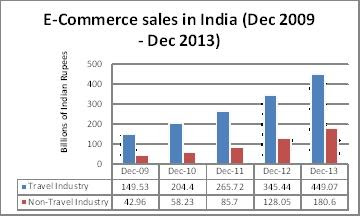 Travel has long held a dominant position in the E-Commerce market in India, and accounted for 83% of all online sales in the country in 2012, according to eMarketer forecasts. Year on year the number of visitors to the travel portal have shown exponential growth. India, in particular, will achieve a CAGR of nearly 38% in the value of online travel retail products between 2009 and 2014.

India is a very good travel destination for budget travelers as it is quite economical to the foreign tourists. As compared to other countries, India has many tourist destinations to offer but lack rigorous promotion and marketing. India’s economic position is strong with democratic and political stability giving it an advantage over many Asian countries. In spite of this, India lags in aggressive advertising campaign, infrastructural facilities, and better tourism friendly policies to compete. As seen from the advertising campaigns India advertises its tourism focusing majorly on culture and customs. India just focuses on one part that is culture and history and fails to address other niche areas of tourism. The exponentially increasing harassment and atrocities against women is a major social issue that the country is facing currently and if not taken into account will prove to be a huge setback for the industry. Poor IT infrastructure and internet reach to the rural areas, under-developed E-Commerce and cyber laws are other important reasons. It is high time that the issues hampering the growth of E-Tourism are looked upon and steps to overcome them should be mitigated. India has a long way to go in terms of Internet Penetration along with IT infrastructure and internet speed. There is strong need of user-friendly technology and services for senior citizens and new-learners. India has a bright future in terms of online tourism as the developed markets are slowly becoming saturated and expensive for time-poor and cost-poor travelers.
Source:-http://www.mbaskool.com/business-articles/marketing/9146-online-tourism-is-india-lagging-behind.html
By Anonymous at March 26, 2014
Email ThisBlogThis!Share to TwitterShare to FacebookShare to Pinterest