BY JONATHAN GREGSON
In the U.K., these days you can take a university honors degree which is a combined course in football and business management. Meanwhile, academics in psychology departments and business schools study lessons to be learned from experience in sporting management, with football often at the top of the list.
And the corporate sector is also in on the game. Management consultancies, lawyers and accountants are increasingly creating their own sporting divisions.
Julie Clark is the London-based head of sport at the international accountancy and consultancy firm Pricewaterhouse Coopers (PwC), which last October became the first sponsor backing England’s bid to host the 2018 FIFA World Cup. PwC has a long track record of advising football clubs, from the top of the Barclays Premier League through to those in the lower divisions, but Ms. Clark maintains that it is a two-way relationship.

Paris-based Gérard Houllier, the technical director of the French Football Federation, the governing body of football in France, and who was manager of the Liverpool Football Club from 1998 to 2004, agrees that business can learn from football. He regularly gives motivational talks to corporate teams on how man-management is the key to a successful organization. “In the world of football we talk about strategy, finance, business partners and the competition as well as management. So there are similarities. But then again there are big differences,” he says. “For example, in a corporate team if someone is off sick someone else can generally take on their role easily. And if someone has a difficult attitude you can simply get rid of them because in business you are dealing with individuals who are not as well known in the media. In football, it is not so simple. We need to nurture our stars and keep them on board,” he adds.
When it comes to the successful creation of a football team, Mr. Houllier eschews the classic business maxim that achievement is 80% effort and 20% talent and points to a 95/5 ratio — 95% being effort and the 5% talent. “The players have to be talented to get there in the first place at the highest level. But then you need to define their roles for them, to get inside their heads to work out what makes them tick. That is the manager’s job. The captain is the relay between the players and the manager, getting the message across. Again, in business there are different dynamics.”
Dr. Paul Hughes, lecturer in strategic management at Loughborough University in the U.K., has conducted an exhaustive study of management in the Barclays Premier League and other football leagues and points out that “football managers are expected to take on a vast range of roles, from recruitment and human resources through training to finance.”
It is a comment which former Southampton FC manager Lawrie McMenemy, now president of the Lawrie McMenemy Centre for Football Research which opened last September at Southampton Solent University in the U.K., agrees with. He points out that a top team manager’s role has changed hugely as the Barclays Premier League grew to become a mammoth business. “Now the manager works hand in hand with the CEO who looks after all of the financial side, especially players’ contracts and transfers which are all done between the agents and the CEO,” he says, adding that “the CEO may listen to what players the manager would like [to have], but after that he does the rest.”

Then there is the mushrooming of support staff, who need to be managed. “Whereas, there used to be just one physiotherapist, now there’s an entire team of fitness experts, dieticians, psychologists and so on,” says Mr. McMenemy. “When playing an away game you need an extra bus for all the backroom boys and girls.”
Mr. McMenemy adds that delegation has always been part of the manager’s job. “Nonetheless,” he says, “the manager still has to handle five crucial things: the players, which is probably the easiest part; the press; the public which, if disappointed, ensure the manager gets the blame; the club directors; and, most recently, the agents — and he can only do so effectively if he appoints the right staff. You need a good No. 2 who can look after the dressing room while the manager is locked in the boardroom.”
Many hard-pressed CEOs would agree that they need a good deputy on whom they can rely. But are there further lessons to be learned for the corporate world? Sean Hamil, lecturer in the department of management at Birkbeck College, University of London, points to differences over what should be long-term objectives between the manager and the CEO. “The manager is intent on sporting success, and to achieve that he is only too happy to spend the owner’s money. So, if you look at clubs where the manager is too powerful there are usually financial issues. You need a strong business manager to stand up against the team manager.”
Dr. Hamil says that currently there are not enough executive leaders in football. He draws a comparison with other industries that rely disproportionately on top talent, such as advertising and investment banking. “Both face similar leadership issues, so it is more about learning from each other rather than football learning from business.” 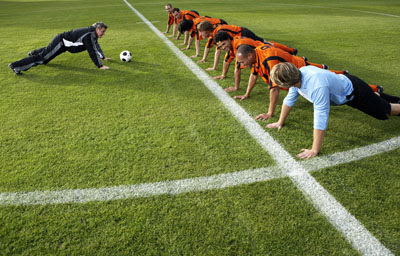 But how to inculcate into the players, no matter if they are footballers or corporate lawyers, the instincts as to when to lead and when to delegate? Alan Bairner, professor of sport and social theory at Loughborough University and joint editor with Dr. Gyozo Molnar of “The Politics of the Olympics — a Survey” to be published next year, believes that “the playing of competitive team sports instills leadership qualities in certain individuals whereas others within the team learn to muddle along and take instructions.”
Dr. Hughes of Loughborough believes that one of the key lessons that the corporate world can learn from football in terms of delegation and leadership is to “give new management time to get to know the team and analyze the dynamics before addressing who should be the leaders and to address underlying weaknesses in the core business rather than simply looking at individual performances.”
Dr. Mark de Rand, reader in strategy and organization at Cambridge University’s Judge Business School, points out, however, that “there is a clear distinction between business teams and sports teams. Businesses have multiple objectives while in sports such as football the individuals generally have a quite singular objective in terms of performance. There is a transparency which is not always so clear in business.”
In both cases, however, the goal is clear — success, whether it be winning the match or the competitive corporate pitch. “Ideals are easily taken from the sports field to the business environment,” says Adrian Furnham, professor of psychology at University College London. “Motivational speakers often come from the world of sport, but they need to translate their experience to what applies in business.”
Patrick Manning, lead partner within the performance improvement practice at strategic consultancy Bain & Co.’s London office and a silver medal winner in rowing at the 1992 Barcelona Olympics, agrees. “I do think there is a role for business to get more involved in certain sports organizations, particularly in helping them to develop long-term vision and to clarify their strategy, but also more broadly to help develop the whole commercial side of the team as a business where there is potential to do that.”
Having said that, he adds that “the kind of mental preparation football players go through before a key fixture is hard to translate into the business space. Sometimes there has to be a tradeoff. Should the managing director of a professional services team put the superstar in to lead a competitive pitch on the basis that they are more likely to win the new business, even though that may limit the role of other valuable members of the team?”
Successful leadership needs to retain a balance, says the Football Research Centre’s Mr. McMenemy. “It’s no good simply being a shouter, a barker, because if that is all then the players won’t turn up for late practice or give their best. Nor can you be too soft, too comfortable with them, because you need to retain their respect. You’ve got to be fair to them, and let them all think [that] you know what you’re doing.
“You let them have an input,” says Mr. McMenemy, “but not too much. You listen, and then you tell them ‘this is what we’re going to do.’ Just as in business.”