Satyamev Jayate – Glamour for a Just Cause

There are Infinite issues in this world, which are more important than an actress buying a dog, but an individual will pay to buy the Actress news piece as it is glamorous. This leads to the papers profits increasing, and the paper tends to publish more such pieces in the future. Other mass media instruments also do the same. It is simple demand and supply economics playing along. There is a market for such useless, masala news items and thus there are papers, news channels e.t.c thriving on this. On the other hand, issues which are of grave importance pass by, unread, as the topic is not glamorous or the way it is presented is not eye catching. 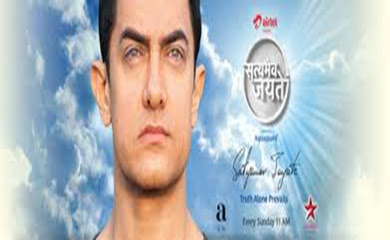 The educated, globalized Indians, who wear the branded jeans and t-shirts & compare themselves with their Chinese counterparts in economic matters, have always given a deaf ear to the social hypocrisy going on in our rural & even urban areas. Around 40 % of Indians sleep hungry everyday, 70 % of the people live under dollar 2 everyday. People do not have proper sanitation, proper place to sleep. But such issues are never brought up at prime time, or are published in glossy magazines and tabloids, because people would not pay to read such gross realities.
In comes a Bollywood superstar, with aggressive advertising, trying to bring to light, these grave issues like, Female feticides, Untouchability to the world .The whole world stands and take interest in what this new rage is. It attracts the popular media, people start talking about it, and a buzz is created. The Buzz generated does not go in vain, Rajasthan CM Mr. Ashok Gehlot promised to take action against Female feticide, Generic Medicine shops were opened in many places in India. People are united to fight against evils like female feticide, dowry menace going on in India. People get informed of how the big pharmaceutical companies are robbing them by selling them, branded medicines & not allowing common people the access to general medicines.

The point is, if Glamorizing of a serious social issue attracts attention and leads to action then, why not????

The gravely important issues like people not getting their basic necessities like food,  should be brought to limelight.
If the End is just and the means is a little twisted, still why not accept it? Yes, bringing in Aamir khan, glamorizing the show, attracted attention .It is generating a lot of revenue for the producers and Aamir too .The so called socialists view it as another dirty trick of the money sucking capitalists , but you cannot ignore the positive results it generated. Issues like people dying of hunger in a far-off village in Orissa, or people becoming cripples due to polio are very unglamorous, they don’t get TRP’s for news channels, and are thus marginalized or shown during the nap time of 3 to 5 Pm. People are too busy to see such gross images of young kids dying due to not getting a square meal or a poor old chap dying due to him not being able to buy the medicines, needed for his treatment.


If instead of Aamir, a lesser known face was to host Satyamev Jayate, then for sure, one – tenth of the present viewers may have even known about the existence of such a show. Nobody would have taken notice of it; the intellectual class would have not gone ga-ga over this show. It is because of brand Aamir, that the show has become a mobilizing vehicle, a reason for relief for social activists, who have been fighting for such issues for so long in the shadows, but they were always marginalized. Ogilvy n Mather’s brilliant campaign caught the eye balls of the masses and created a buzz, which resulted in high TRP’S and indirectly it created awareness in the general public & as the old adage rightly says – “Knowledge is power” we can see the power of the awareness created, in the different steps being taken by state & non-state players in creating a better life for the common people.
Not only in Satyamev Jayate’s case, there are many examples in this world when glamour have used for a noble cause. Like, Angelina Jolie being a UN ambassador, or priyanka chopra being a UNESCO ambassador. People take notice of the event and also participate, as seen in the Aamir – Gehlot case or people donating hugely to Haiti earthquake victims, after celebrities thronged to Haiti.


In such cases, yes, money is been made, but in which profession, does a person works, without any incentive? Even a saint needs food, and basic medical care to survive and continue doing the good deeds for the society. These people (celebrities) are influencers, opinion leaders and if they use their influence for a noble cause, and are charging for it, then so be it. It is better than the so many lazy, inactive people who do not use their talents and position to influence the masses, in acting for a just cause.


Satyamev Jayate may be, for the conservatives, “milking people’s misery for money ‘, but for a broad minded, rational person, in my opinion, should be a step towards a more better and equal society, where everyone is been given  the basic resources for living a more humane life . If media’s twisted methods are used, to bring a just cause in the open & if this leads to the down trodden being helped and even if one person is able to come up from his/her miserable life of hunger & poverty, then in my opinion glamorizing social service is the way ahead.

Source:-http://www.mbaskool.com/business-articles/marketing/7574-satyamev-jayate-glamour-for-a-just-cause.html
By Anonymous at March 26, 2014
Email ThisBlogThis!Share to TwitterShare to FacebookShare to Pinterest