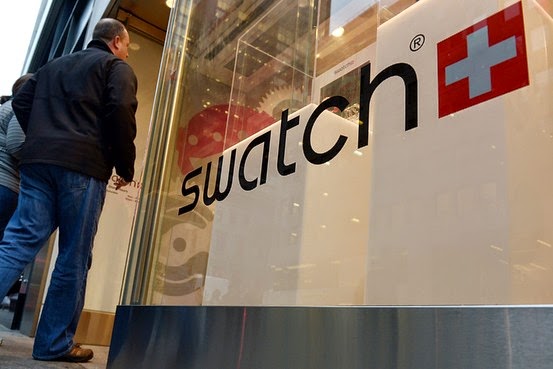 BASEL, Switzerland—A Swiss vote earlier this year to tighten immigration could damage Switzerland's watch industry, potentially limiting the number of skilled employees companies such as Swatch Group AG UHR.VX -0.36% and Rolex SA are able to recruit, industry executives say.
Roughly half of the Swiss watch industry's 58,000 employees either cross an international border every day for work or permanently live in Switzerland, according to the Convention patronale de l'industrie horlogère suisse, the employer's association, known as the CP. The industry worries that it won't be able to meet demand for its products if it loses a chunk of that workforce.
"Without border-crossing workers and without foreign workers in general, we will really have trouble," said Jacques Duchêne, a director of closely held Rolex and one of the organizers of the Baselworld Exhibition, which opened on Thursday. The exhibition is the largest watch show in the world, drawing industry executives, buyers and watch aficionados from around the globe to this quiet Swiss city.
Mr. Duchêne's comments come as the Swiss government debates how to implement caps on immigration approved by the Alpine country's voters last month. Watches are Switzerland's third-largest export of manufactured products and need highly skilled technicians and craftsmen to produce timepieces that can cost upward of $50,000.
The Stop Mass Immigration measure directs the Swiss government to introduce quotas for foreign workers within the next three years. Currently, citizens of the European Union are granted Swiss residence permits as long as they have jobs under a 1999 treaty that also governs access to a range of important markets. Introducing quotas, however, may invalidate the treaty.
The government has three years to introduce a law that meets the requirements of the referendum but the CP has already begun a lobbying effort. Members of the association have started meeting with representatives of the Swiss government to express concern about the potential impact the law could have on the industry.
"We need more people and can't find them in Switzerland alone," said François Matile, general secretary of the CP. "Foreign workers are vital to the industry."
Some watch-industry executives say the immigration issue might be addressed by implementing higher quotas for watchmakers, a solution that would allow the industry to maintain the workforce it needs by recruiting non-Swiss workers. Others say they hope for a political solution to the situation.
The concerns come as watchmakers wrestle with sluggishness in their biggest market: China. Together China and Hong Kong buy a combined one-quarter of the industry's output, but exports declined last year amid Beijing's crackdown on lavish gift-giving.
The Ukraine crisis could also weigh on the industry as fewer Russians travel abroad.
"The Russians are big buyers of luxury watches, but they aren't traveling at the moment," said Ricardo Guadalupe, chief executive of the swanky Hublot brand. "At our boutique in Munich, for example, there are always a few Russians, but in March there's been zero."
Mr. Guadalupe said the watch industry's sales could slip slightly from last year's record 21.8 billion Swiss francs ($24.6 billion), although his brand, which is owned by French luxury conglomerate LVMH Moët Hennessy Louis Vuitton SA, MC.FR +1.52% would likely be insulated partly because of its sponsorship of the World Cup in Brazil. He said overall Hublot sales could rise between 4% and 5% in 2014.
Write to John Revill at john.revill@wsj.com
Corrections & Amplifications
Last month Swiss voters approved a referendum to introduce quotas for foreign workers within the next three years. Headlines that appeared with an earlier version of this article incorrectly referred to the Swiss measure as a law.