Digitalization has definitely arrived. There is absolutely no doubt about this. What one need to know is how one needs to address and tackle this key area in our business.We definitely need to embrace and strategise a proccess of digitilasation and we show you how we do it. 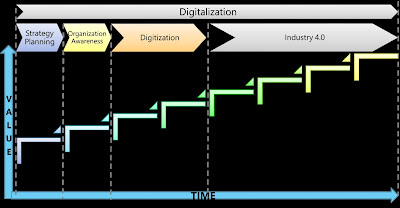 Independent consulting companies, confederations of industries and international organisations confirm the importance of the digital world. They show us that most Indian industries have initiated activities of checking out on next generation of digital technologies. Some of them are the Internet of Things (IOT), Mobile Technologies, Robotics, 3D printing, Cloud Computing and Data Analytics as handles of digitization. As we are aware, these set of digital technologies are set to bring a major ‘Business Disruption’. They shall alter the way in which the product design , manufacturing, and equipment operation will be done in near future. Optimistic predictions suggest that IIoT Business will be in a range as high as $15 trillion of the global GDP by 2030. These sheer numbers and the initial successes obtained by the manufacturing setups of the developed countries are now creating a pressure on Indian industries to take the process of digitalization very seriously.

Hence, many of the Indian industries are banking on the domestic market to experiment and sharpen their digitalization strategies. Many organisations particularly in the automotive domain have initiated digitalization activities in partnership with their parent organisations.

However, just copying the strategies of manufacturing setup of developed countries will not yield success. We need to consider the different scenarios of the typical Indian manufacturing setup and the different psychological factors involved. One needs to get in the depth of these subjects and then design one’s strategy of a suitable digitalization. I would like to caution the readers that there is no one strategy that fits all the manufacturing industries of different domains. Each of them will have to tweak it based on their digitalization maturity and needs.

Hence, we would like to outline a generic strategy which would generally suit the Indian manufacturing setups. Before this, we should clarify that the digitalization of a manufacturing setup is not a single domain problem and  cannot be handled by an expert with a single skillset.

The digitalization strategy recommended for a typical Indian manufacturing setup shall be as shown below. Instead of a two stage activity that is mostly adopted and followed in the developed countries for digitalization, we need a 4 stage one.

The kick-off this stage should be done with suggested several steps. One very crucial aspect that needs to done at this stage is identification of a champion within an organisation who is sufficiently motivated to entirely run the digitalization campaign.
It is also recommended that detailed study should be done in the form of prefeasibility and feasibility studies during this stage to find out the ‘as-is’ condition of the manufacturing setup. We would highly recommend that the organisation should not shy away from seeking external expertise if one may not be available within the organisation. This step is highly recommended as the external expertise shall bring experience and learnings of the previous implementations. It is recommended to take help from an expert who is vendor or product neutral in this study. This will help to obtain a critical and clear view of the ‘as-is’ condition. Based on the findings of this activity, and the vision of digitalization, a picture of ‘to-be’ manufacturing setup and the shape of the organisation’s digitalization plan should be carved out.

As a part of the core strategy, the leaders of the manufacturing industries could prepare their organization and support functions for a cultural changes and skills upgradations during the journey of digital transformation.At this stage, more details of probable stakeholders, partners and their roles and level of engagements need to be identified. An organisational level awareness campaign and buy-in campaign can be kicked-off on the goals of digitalization and its benefits. It is also recommended that maximum organisation resources are made to be the stakeholders. The several levels of engagements and activities can be identified involving all the levels of organisation hierarchies. A separate level of engagements and enrolment in digitalization program be carried out where union and labour issues exist. Generally,  this could mean job reductions and hence is a very sensitive issue. It needs to be handled by industrial psychology experts. The successful roll out of this stage will identify the speed and momentum of the overall digitalization program within an organisation.

As a core strategic step, most of the manufacturing industries weave heir digitization plan by implementing automation (data generation) & connectivity as one of the basic step. Manufacturing industries connect and integrate its Information Technology (IT) Systems and Manufacturing Operations Systems (MOS), both horizontally and vertically such that it can allow data transfer to happen seamlessly amongst them.

As a part of the connectivity sub-strategy, most of the manufacturing industries need to upgrade their existing standalone automation systems into sophisticated Cyber Physical Systems (CPS) / Internet of Things (IOT) solutions. Special efforts need to be made to integrate geo-spatially separated facilities so that all the data is brought to a centralized locations for better decision making.  The latest technological advances like Hardware Virtualization, Cloud Computing, Internet Protocol Version-6 (IPV6), Micro Electro – Mechanical Systems (MEMS), faster and reliable microcontrollers, ubiquitous internet connectivity and better bandwidths are needed here. This can provide a major boost to the Indian industries and particularly their IOT plans. An important booster to the IOT is advances in the field of wireless and mobile connectivity. These technologies need to be leveraged in a right way to reap its benefits. It is advised to the digitization leadership that a meticulous study of the existing systems by vendor independent experts is done. This can help prevent unnecessary removal of brownfield manufacturing setups and can help in saving a sizable expenditure.

The industries need to boost their production numbers and qualities by integrating Robotics and Plant Automation. There is a vast variation in the amount and level of automation in the Indian Manufacturing setups. The increase of level of automation and integration of it with IT systems should be one of the core element of the digitalization plan. With recent advances in the field of MEMS sensors, Vision based systems, navigation systems and Algorithms, Robotics as a technology has got major boost in emergent areas of Swarm Robotics and Automated Guided Vehicles (AGVs). Coupled with these technologies and RFID, manufacturing industries can bring in automation of the stores, warehouses and distribution channels. Incorporation of these technologies in the digitization plan can substantially improve the business efficiencies of the Indian manufacturing industries. Another important thing which should be made the cornerstone of the Automation and IT enablement is the standardization of Automation Systems, their Interfaces and their expandability. Deep thinking during the planning and design phase needs to be done on these aspects. Attention paid in the initial phase on these factors can help reduce the implementation hiccups.

One important aspect to be taken care during the horizontal and vertical integration of the Information Technologies (IT) and the Operational Technologies (OT) is the definition of the ownership and responsibility of work. Until now, in most of the Indian industries, the IT and the OT worlds have been physically isolated and had very minimal overlaps. Both these fields operate differently and are governed by different operational criteria’s. IT-OT Integration also brings in the additional responsibility of managing and mitigating the risk of Cyber Security. Hence the Digitalization leadership needs to think deeply and understand the organizations operation, the skills of the resources and the existing state of the IT-OT Convergence before handing over the IT–OT integration responsibility.

Last but not the least, I would suggest is the inclusion of the Mobile and Internet technologies in the Connectivity sub-phase of digitalization. The mobile and Internet technologies can be effectively utilized by the manufacturing industries in various areas like sales, support and after sales support. These technologies can be used for effectively coordinating with their movable staff. Further, mobile technologies can be used as an aide to a mobile workforce. The front line Sales team can be effectively connected to the IT systems by integrating mobile sales application. This could enable them to create opportunity details, track Sales follow-up and help in sales and production planning.   Mobile applications using heuristic trouble shooting algorithms can be effectively be used for first hand troubleshooting and remote hand holding of the customer’s by the after Sales support teams. These kinds of mobile technology adaptations can reduce the sales and support cycles and can effectively improve the customer satisfaction.

Stage-4 à Industry 4.0:
Now there is seamless transmission of data across the industry layout. This provides immediate visibility of the entire manufacturing setup. This can help the decision makers get new insights and can help bring in transparencies. The available real-time data can be collected in big databases and then can be provided to data analytical /Artificial Intelligence (AI), Machine Learning (ML) and Deep Learning tools to build insights about the behavioural patterns and signatures and thus help in improving predictability and cognitive actions.

Thus the entire Digitalization program can help the Indian manufacturing industries to usher in the fourth industrial Revolution. It can help face threats of ‘Increasing the Productivity Gaps’ and superior quality aside from the competition of developed countries.

During my various interactions with responsible authorities of the Industries on the impact of digitalization on the Indian businesses in upcoming years; I understand that many leaders are seeking for right guidance from plethora of confusing data available on the net and jargons of new technologies (Automation, Networking, IIoT, Big data / Clouds tools, Machine Learning, Deep learning, Robotics,) and Cyber Security concerns to handhold them during their journey of digitalization.

All in all, it seems that the good times are just about starting with industry-4.0 and Digitization. Initiatives like C4i4 labs is one such step towards demystifying the Digitalization / Industry 4.0 and make it easy to understand and implement it. 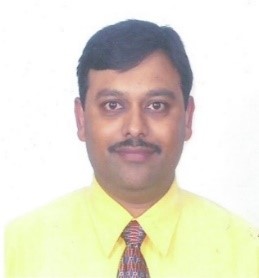 Sandeep Shroff has more than 22+ years of experience. He core expertise is in architecting, design and development of real-time systems in the Industrial Automation, Embedded Systems & Software space professional.

Essentially, he is an IIOT evangelist. He has a unique advantage of having end-to-end design and implementation experience of IIoT and Industry 4.0 projects and has wide spectrum expertise spanning from right Sensors selection to right Intelligence tools. He provides consultation in the prefeasibility/ feasibility /proof-of concept and hand holding for IIoT and Industry 4.0 projects. Presently, he is a part of the C4i4 Lab core team.