Towards The Indian AI Dream: The Story So Far And Moving Further to Succeed... 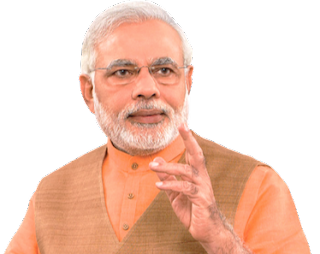 "Technology is evolving at such a fast pace that very soon artificial intelligence will dominate our way of life."

"Indian Agriculture department's AI algorithms come up with their yearly list of region-wise best recommend crops to be taken this year." - -Just a casual news headline from the -truly AI-enabled India- of the future:)

But that future seems pretty far though, right?

Well, it might not be as far as you think.

Though the journey that started in as early as 1986, so far, has been full of hurdles and setbacks, we still have come a long way.

And amidst the whole noise of why can't India. yet dream of AI, some numbers might actually surprise you like, India ranked the third biggest AI-focused start-up hub among the G20 countries in 2016.

Read on to know how far have we come and how far do we have to go in the journey of making India a truly AI-enabled country.


HOW FAR HAVE WE COME:


In 1986, the Government of India launched the Knowledge-Based Computing Systems (KBCS) program partnering with the United Nations Development Program. It is since then that research in AI in India took off but hurdles like lack of funding, lack of infrastructure, and lack of awareness have always been there.

Today, this is where our Private and Government sectors stand in the field of Artificial Intelligence.

Presently, there are around 3,000 private companies working in the field of AI in India, with 2049 being startups.

National portal for AI, INDIAai, lists a number of budding start-ups that have bagged multimillion dollars worth of investments from India and abroad.

The Government of India has also adopted an enthusiastic attitude towards AI and has taken some milestone steps towards empowering India with it.

Some prominent actions taken by the government are:

• The NITI Aayog, after extensive consultations with industry-leading experts, various ministries and academicians, has sketched out India’s National Strategy for Artificial Intelligence (NSAI) in June 2018

• A project for forming a fundamental integrated cloud-based framework-'AIRAWAT' for nation-wide research in Artificial intelligence, worth Rs. 7,500 Crore in the country.

• Formation of  INDIAai(https://indiaai.in/): a one-stop platform for all AI-related movements and developments in India. Visit the portal and you won't be disappointed!

•  A Rs 400-500 crore project on speech-to-speech machine translation has been planned by India's Ministry of Information Technology.

• India's Central Board of Secondary Education has teamed up with Microsoft to facilitate tech skills development.

•The Indian army is on the way to implement AI  to eliminate human error in weapon systems, surveillance.

• The Ministry of Housing has ordered the implementation of AI algorithms to help curb corruption in bookkeeping.

• The government is also planning to implement artificial intelligence in Indian agriculture, banking, schooling, and the army.

FUTURE OF AI IN INDIA:

Though obviously late than the developed nations, India has certainly made a start.

The dawn of AI in India in the present is pointing towards an extremely bright and welcoming Future.

Showing a glimpse of possibilities India could only dream of.

According to reports, AI is believed to boost the rate of innovation in India by about 230% in just the upcoming two years!

A study by IT giant Accenture says AI has the potential to add nearly $1 Trillion to the Indian economy just by changing the form of work and generating better outcomes for businesses. It is also predicted that AI empowerment could add up to 15% to India's income until 2035.

Keeping such figures in mind, the government sector is also showing glimpses of employment generation. A good example can be of the Union Cabinet's national mission on cyber-physical system technologies that would create 40,000 jobs in the short run and 200,000 jobs in the long run.

Artificial Intelligence has a great scope in India because of our vast and majorly young population. With applications like Google Virtual Assistant being increasingly used by various groups of the population from urban as well as rural India, in their own languages and dialects, signifies that AI has already started to deepen its roots in the country.

In the corporate world, when almost all software companies and large industries we're already keen on hiring AI professionals trained in the field of Machine Learning, the current pandemic scenario will further catalyze the demand to automate their operations using AI.

Creating an increased demand for AI professionals in the world and India as well.

The Chariot of AI has been pulled so far till here through a way full of obstacles, by our highly competent Workforce. And abled Workforce is what we need to pull this Chariot forward to the future.

Whereas, the number of freshers stepping into AI career stood at 6000.

While these figures might not be very impressive while considering a job in AI in India, what might actually surprise you is the fact that the demand for the workforce in Indian AI actually outnumbers the supply!

In spite of being in demand, 2,500 job positions in AI remained unoccupied in 2019, due to the shortage of required talent! 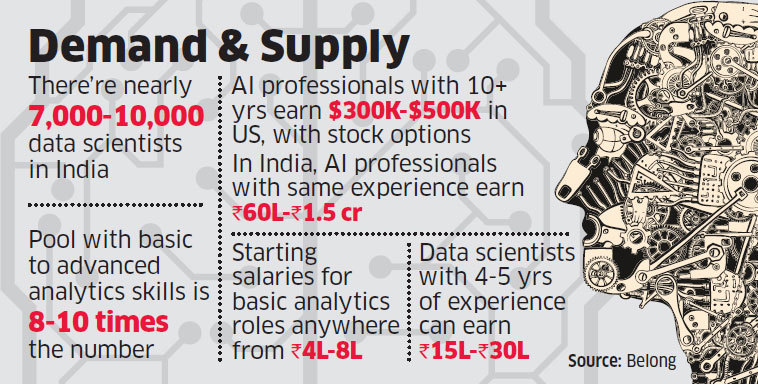 Limited availability of required workforce remains to be one of the biggest obstacles in the path of AI-enabled India. While countries like China produce thousands of PhDs in AI every year, India's number still lies in a few hundred.

While a limited workforce is not the only challenge, there are some other big hurdles as well.

SOME MAJOR CHALLENGES IN THE WAY OF AI IN INDIA:


Some of the biggest challenges are:

Availability of good quality, clean data is a fundamental requirement for any kind of AI operation. And in India, presently there is no institutional mechanism in place to maintain high-quality data.


• The High Cost of Failure:

Advancement in AI is achieved through extensive research and experiments. And experiments need money. And just as the occasional unfortunate failures of ISRO are overtly condemned in our country, ambitious projects like AI are highly discouraged.

Most of the government agencies refrain from adopting the technology for their businesses as they find it unreliable.

Another problem is that we don't yet have a cloud infrastructure as good as the developed nations. And hence a lot of companies have to shift their operations from India to any developed nation.

HOW CAN WE OVERCOME THESE OBSTACLES :

Artificial Intelligence and Machine Learning need data. And the first thing that needs to be done is making enough High-quality data accessible. This is being done through projects like 'AIRAWAT', but we still have a long way to go.

-Encouraging collaboration between the Private and the Government Sector:

The Private Sector has talent, the Government has funds. The marriage between the two is what can drive us forward.

-Spreading Awareness About the Capabilities of AI in the General Public:

Government agencies, public sector enterprises, and small/medium-scale domestic firms should be made acquainted with the benefits of AI through workshops, conferences and live demonstration of how to implement AI to augment business growth.

We, for sure - have begun late, have a long way to go, not at par with the progress already made by the developed countries, and our path is far more complicated. But we HAVE made a start. And at present, India stands as an ocean of budding opportunities in the field of Artificial Intelligence.

What we really need are the young AI enthusiasts empowered with the education and opportunities they deserve, and those hurdles in the way would soon start looking dwarfed in front of India's aspirations.

Though the dream of a truly AI-enabled India seems too ambitious today, so did the dream of our own Space missions seemed. But could all those obstacles keep India from flying off to Mars?

Believing in our capabilities and Hoping for the best, I look forward to hearing the 'Indian Agriculture department's AI algorithms report' soon in the near future.